We, the undersigned Bishops of the International Circle of Roman Catholic Women Bishops express our anguish, sadness and incredulity at the current treatment of children at international borders of the United States. We speak out against any failure to provide adequate water, food, clothing, bedding and shelter to migrant children, against the separation of children from their parent/s, against the housing of children behind bars in facilities that are often former prisons, and against any failure to provide adequate care and supervision for these children. We see the treatment of children at international borders as a humanitarian crisis.

As women of Christian faith, we take seriously Jesus' commandment to treat all people as we wish to be treated. We call upon Christians worldwide to consider this humanitarian issue, regardless of their position on international migration, and to take action consistent with their conscience on behalf of children being held at all international borders throughout the globe.

This past weekend we celebrated the Feast of St. Mary of Magdala and Jean’s Eleventh Anniversary of Priestly Ordination. I did not want those events to go unheralded.

St. Mary of Magdala was a friend of Jesus and then the “Apostle to the Apostles.” Elizabeth Johnson relishes calling people like her “Friend of God and Prophet.” It prompts me to wonder if we would describe ourselves as Friends of God and Prophets. That is God’s dream for us! Sr. Ita Ford, Maryknoll missionary martyred in El Salvador said, “Find something worth living for, even worth dying for.” Mary of Magdala found that in Jesus—he became her inspiration, his mission became her mission. It seems like she understood him better than some of the Twelve.

Last Saturday, Jean and I and a number of members of our community went to the rally for the Nuns on the Bus—Friends of God and Prophets. The Nuns journey this year was to the two political conventions. Sr. Simone Campbell presented a flyer contrasting the positons of Hillary Clinton and Donald Trump. She cleverly said, “We are not endorsing either candidate. We are asking them to endorse us and our mission to “mend the gap” between the 1% and the 99%.” Sr. Simone has developed quite a relationship with Speaker of the House Paul Ryan. As you might imagine, after many encounters over several years, their idea of budget priorities are still diametrically opposed. However, Sr. Simone revealed that the Holy Spirit prompted her to take a new tack with Paul Ryan. He is married with four children. His family lives in Janesville, Wisconsin while he works in Washington and then flies home every weekend. She said to him that she was trying to imagine what it was like for him to be so far all week from this family that he loves so much. Being on his side, trying to enter his world and his heart space changed their relationship. They still disagree on budget priorities but it changed the level of their conversation. Love and the Spirit does such things. How are you and I called to be Friends of God and Prophets? So she began The Nuns on the Bus tour in Janesville, Wisconsin with the message “Mend the Gap.” Many of the 99% probably could not even get the weekend off let alone fly home every weekend to be with loved ones. (I invite you to go to the website www.globalsistersreport.org where there are several articles about the Nuns on the Bus tour including four social justice virtues for the 21st century: joy, holy curiosity, sacred gossip and doing our part.)

The second important event this weekend is Jean’s eleventh anniversary of ordination as a Roman Catholic Woman Priest. I will always remember how many women have come up to her and said, “Thank you for doing this for us!” I am sitting here at Jean’s desk typing this letter and before me is a picture of Jean meeting one of her heroines, Sr. Theresa Kane who courageously challenged Pope John Paul II to work for the ordination of women.
We are so grateful that all of you have joined us in co-creating The Spirit of Life: A Catholic Community of Justice and Joy.

Sr. Joan Chittister offers us a meditation on the friendship between Mary of Magdala and Jesus. God is inviting us, too, to be Friends of God and Prophets.

The friend of Jesus

Feast of Mary Magdalene, July 22nd Joan Chittister
“If I were pressed to say why I love him,” Montaigne wrote of his deceased friend Etienne de Boetie, “I feel my only reply could be, ‘Because it was he, because it was I.’” Friendship, real friendship, in other words, is the blurring of two souls into one where it was thought two had been. No price exacted. No interest paid.

Friendship is the linking of stories. It is a spiritual act, not a social one. It is the finding of the remainder of the self. It is knowing a person before you even meet them. I am not so sure, then, that we so much find a friend as it is that friendship, the deathless search of the soul for itself, finds us. Then the memory of Mary Magdalene becomes clear, becomes the bellwether of the real relationship.

Mary Magdalene is the woman whom scripture calls by name in a time when women were seldom named in public documents at all. She is, in fact, named fourteen times—more than any other woman in the New Testament except Mary of Nazareth, the mother of Jesus, herself. She is clearly a very important, and apparently a very wealthy woman. Most of all, she understood who Jesus was long before anyone else did and she supported him in his wild, free ranging, revolutionary approach to life and state and synagogue. She was, it seems, the leader of a group of women who “supported Jesus out of their own resources.” And she never left his side for the rest of his life.

The Magdalene factor in friendship is the ability to know everything there is to know about a person, to celebrate their fortunes, to weather their straits, to chance their enemies, to accompany them in their pain and to be faithful to the end, whatever its glory, whatever its grief. The Magdalene factor is intimacy, that unshakeable immersion in the life of the other to the peak of ecstasy, to the depths of hell.

—from The Friendship of Women by Joan Chittister

At The Spirit of Life, our belief in the sacredness of all created beings and loving relationships compels us to respond with care and compassion to all who are marginalized in our church and world. We invite you to come and to pray with us as we “do our own work” in growing into a deeper awareness of our own gifts and ‘growing edges’ and together create a community that invites diversity and honors the uniqueness of each individual and every journey. We are confident that you will feel welcome in the “home” of The Spirit of Life.

Henry J. Marchant, of Marlborough, MA, died July 1st, on the cusp of his 99th birthday. Henry was predeceased by his loving wife Dorothy to whom he had been devoted throughout their 72 years of marriage. 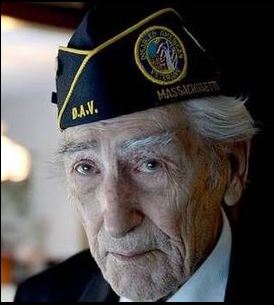 Born in Leominster, MA, he was the son of the late Arthur and Florence (York) Marchant. A graduate of Watertown High School, Henry was a life-long learner who embraced new ideas and found special joy in the presence of his great grandchildren and his many nieces and nephews. Mr. Marchant served in the US Army,Co C 101st Infantry Division during WWII. During his tour of duty he was the recipient of 2 Purple Hearts and post service was awarded the Bronze Star and the French Medal of Honor. Post retirement, Henry was a well known realtor in the Marlborough area.

He is survived by his daughters; Ms. Carol Ann Marchant of San Clemente, CA and Rev. Jean Marchant and her husband Rev. Ronald Hindelang, of Framingham, his brother; Bernard Marchant and his wife Doris of Manhattan Beach, CA, his sister; Rita Holden of Newbury Park, CA, his brother-in-law; George Fearnley of Hingham, MA and his sister in law; Marilyn Springmann of Salem, NH, his grandchildren; David Taylor,of Long Beach, CA, Dawn Stapelfeld of Brookline, NH, Dana Taylor of Orlando, FL, Heidi Trainor of Hudson, MA and Rebecca Mangan of San Clemente, CA, 14 great grandchildren and 1 great great grandchild. He was also the brother of the late Raymond and Donald Marchant and Mildred White.

A Mass of Christian Burial in celebration of Henry's life will be held at 7:00pm on Monday, July 6th at The Spirit of Life Catholic Community, located at The Congregational Church of Weston/UCC, 130 Newton St., Weston, MA 02493. Preceding the Mass, visiting hours will be held at the church from 5:00-6:30pm.

Will the Surprising Pope Francis Solve the Abuse Crisis? 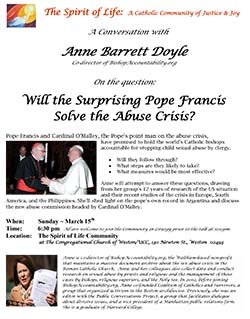 Click on this image to read the complete text of a letter Reverend Jean sent to Cardinal Sean O'Malley on November 28, 2014. 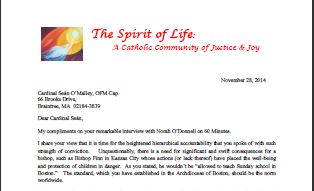